On October 15, the "Nyuwa" (Goddess of Sky-patching in Chinese mythology) team from the Department of Gynecology & Obstetrics of the Second Clinical College of Tongji Hospital, Tongji Medical College, Huazhong University of Science & Technology won the silver prize of the “Red Dream Building Project for College Youth” at the 7th China International "Internet+" College Students' Innovation and Entrepreneurship Competition with its public welfare program "Nyuwa: the World’s First Public Ovarian Cancer Prevention and Control Platform". The team has also helped Huazhong University of Science and Technology win the group prize of this event for universities and colleges. 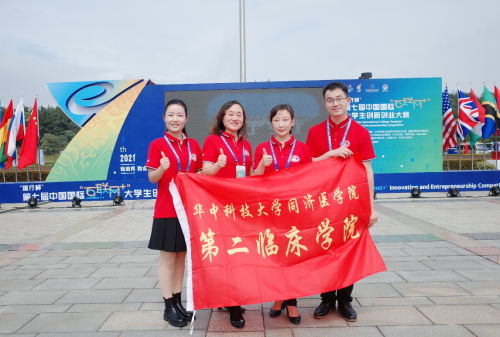 The 15-member team, including Zeng Shaoqing, a MD who has completed the 8-year program of clinical medicine and Jin Ping, a MD candidate, is led by Song Jing, Party Secretary of the Second Clinical College and supervised by Prof. Gao Qinglei from the research team headed by Ma Ding, Academician of Chinese Academy of Engineering and Director of Department of Obstetrics and Gynecology of Tongji Hospital. The team shared their story behind the Nyuwa platform, which is part of endeavors the talented youth of Tongji Medical College have made to realize the Chinese Dream and also a testament to the Tongji spirit of “standing together with the country and the people in both good times and bad” for the first time at the " competition. Their story has been recognized with the Tongji Medical College of Huazhong University of Science & Technology winning a silver medal, which is also the first medal the college has ever won at the competition.

China International "Internet+" College Students' Innovation and Entrepreneurship Competition is an event co-sponsored by 12 ministries and commissions, including the Ministry of Education to carry out the national initiative of "mass entrepreneurship and innovation" proposed by the CPC Central Committee and the State Council. This competition focuses on promoting the implementation of the innovation-driven development strategy, ushering in profound changes in the university talent training paradigm in the new era, and fostering a new outlook on talent training and high-quality development.

Back in 2017, realizing the perennial difficulties in detecting, preventing and treating ovarian cancer, young doctors and medical interns from the Department of Gynecology & Obstetrics, decided to contribute their efforts to overcome these difficulties. In September 2018, the world's first public ovarian cancer prevention and control platform, Nyuwa was established in the National Clinical Research Center for Obstetrics and Gynecology under the guidance of Academician Ma Ding and Prof. Gao Qinglei. In the past three years, the "Nyuwa" team has traveled across the country, pooling clinical data of 150,000 women with ovarian masses from 38 hospitals in 20 cities into the platform. They have developed and promoted the AI ultrasound early diagnosis system, and provided free genetic testing services and free prescriptions to people in need, as well as long-term, standardized follow-up management and health education to 10,000 ovarian cancer patients. Today, the "Nyuwa" platform has developed into the world's largest public ovarian cancer prevention and control management platform, contributing Chinese wisdom to solving the two most challenging problems faced by over ovarian prevention and control, late detection and difficult management, from a public health perspective.